A Story Design Retrospect on TLTSS

Prologue - The Jam Game That Got Its Own Essay

As announced last week, I'm writing a two-part mini-essay about my latest game The Last Thing She Saw. Part one focused mostly on the general aspects, and was formatted more as a postmortem; looking at what went right and what didn't with the mentioned parts.
This second part will be entirely focused on the story, and how everything else is designed to complement the story, as opposed to the story being written to pad the gameplay (as would be usual for a precision platformer like this one).

IMPORTANT NOTE: I will be talking about every single aspect of the story, beginning to end, including the credits. If you're still playing the game or plan to play it, and don't want a spoiled experience: this is your only spoiler warning.

So without further ado, let's dive into it.

Chapter 1 - Dedicated To My Dear Friend.

If you're at this point, you've either seen the credits or don't care for the spoilers. Either way, the most obvious - maybe a little out of place for a game - thing you'll see in there is the "Dedicated to my dear friend" section. There's a couple reasons this is in there. But let me first clear up a misconception:

While the story is "deeply personal" and does take inspiration from my own experiences, it's not based on experiences I had with her. Far from it, actually. That wouldn't even make sense.
One of the reasons I put a dedication in there, is to make the game even closer to a traditional story. "Dedications" are something authors put in their novels, but not something many game devs but in their games. This was my way of bridging the gap between the two worlds, and while that might be mildly out of place, I don't regret it.
I won't go into details about why I dedicated the game specifically to her. In essence, it's just that ever since we met, I feel like she's always been there for me. This is my  unique way of saying "thank you" for that (even if she'll never get to see it herself).

Let's start from the beginning then. The Last Thing She Saw tells a story of how love could evolve between two star-crossed lovers at a relatively young age (between 16 and 19 years old). A first love, at that, for both of the parties involved.
Now, some might argue a precision platformer isn't the best way to convey a story of love, and that's fair. But I'd argue a precision platformer did the progression of the story justice with the nature of its level design.

The difficulty curve is steep, yes. The levels get brutal quickly, yes. The hearts make it even more agonizing on the player, yes. And all of that is by design.

A very obvious, early example where this is evident is Stage 2:

Design of the stage is simple enough; cross a gap of spikes to not die, and an extra obstacle that's less important for the story, but present to have a more challenging heart-collectible.
This is a direct visual representation of what the story is telling you: "Getting to know her was a challenge... at first, anyway. Almost like trying to bridge a big gap."
This stage directly parallels the "big gap" mentioned after you cross it.

This is by far the most obvious example in the game, but it's not the last. The others are (and I highly suggest you check them out yourself)
- Stage 7: it's focused around the "light hopping", and ends with a drop. This stage talks about "hiding my feelings" and "keeping falling for her".
-Stage 9: the second jump is by far the tightest jump you'll have to make in the game, and introduces it with "now I have to face my biggest challenge yet".
-Stage 10: first level to use screen-wrapping, also talks about her love being "difficult to wrap your head around".
-Stage 15: top part contains three spikes, a space between, and then another spike, with the text above them "I didn't feel connected anymore".

This covers way more of the game, and is inherently baked into the design of it.  A stage where this implicit story-telling truly shines is Stage 8: 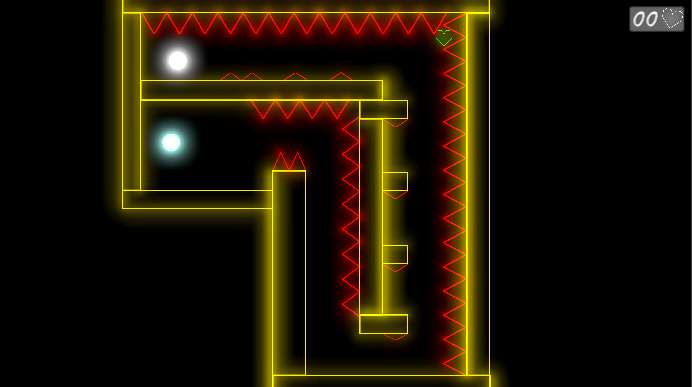 The first text you come across is "Today was the day I'd ask her out", place right before one of the more tricky jumps on the main path (= without collecting hearts).
This spot is designed to be a place where many first-time players will die over and over and over again (and from the feedback I've gotten, that seems to be the case). This also means you'll see that message over and over and over again.
"Today was the day I'd ask her out."
As if the someone is talking to themselves in an attempt to find courage to actually ask her out.
This is enforced even more with the ascending "staircase" on the right: each jump you make reveals a bit more of the "I"-character trying to introduce the idea to the "she"-character. And every time you die, you'll see them again.
Just as if someone would be practicing the conversation to themselves.

The game is filled to the brim with things like these, and I'll probably make another post next week going over all of those (like I did with the "direct story" segment), but that'd frankly take up too much space here.

If you played the game until at least the halfway point (meaning Stage 11), you'll know the game takes a turn. 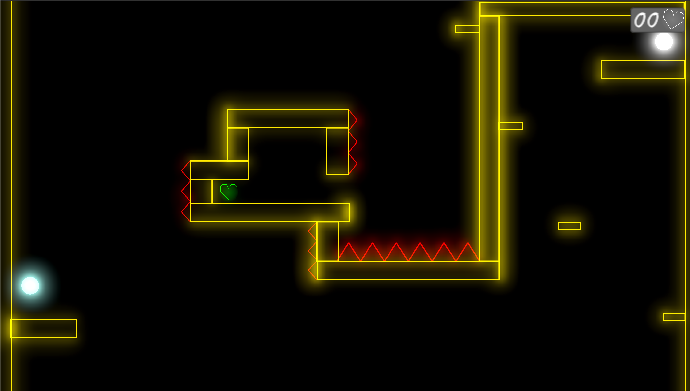 In setting, in mechanics, in difficulty and in focus.
The focus on her, or them is slowly but surely lost, and the longer it goes on, the more it becomes about "me". You're no longer listening to "our" story, you're listening to "mine", and that's also reflected perfectly in final Stage 21.

Originally, this shift would've been even more apparent, and this is where the music tie-in to the story comes in (and I'll mention it again in the next chapter).
Originally, the two tracks "My Blind Love" and "One Final Photon" were supposed to be tracks that symbolized the part of the story you're in. A lighthearted, happier "My Blind Love" for the first part of the game, where the main focus is falling in love, with a transition into a more bleak and sad "One Final Photon" for the second part of the game, where the main focus is being in love, and every single doubt that comes with it.

But this shift in focus is exactly why you don't get a "satisfying" pay-off at the end. Why you don't get to see what this "Last Thing She Saw" was, even though that was the point of the entire journey. You were The Last Thing She Saw after all.
By the end of the game that doesn't matter anymore, because that's not the story you're playing anymore.
You're playing my story...

As mentioned several times, "My Blind Love" is basically the "main theme" of the game (even though "One Final Photon" is the main track). It's The Last Thing She Saw's motif, as is the layout of Stage 1:

These are Stage 1, Stage 11 and Stage 20, from left to right, and while the general stage layout isn't directly copied over, I made an effort to keep the primary part as recognizable as possible: the room containing the heart. And by the heart-bound texts you get from them, they are also connected to each other: "It was love at first sight...", "It didn't end with first sight.", "It stayed love at last sight."
It's also no coincidence that "My Blind Love" is the track that plays during these levels. The two of them make up the very essence of what TLTSS is, and every iteration of them indicated a major moment in the progression of the story. The rise (Stage 1), the fall (Stage 11), the decay (Stage 20).

It stands for a moment to reflect how far you've come, to take a step back and look how far the situation has evolved or escalated since you last heard that music, since you last were here.
In a way, it's almost like coming home.

The green hearts also have a big part in the narrative of the game. Not only do they add to the direct story being told to you, but them on their own are also a big part of the implicit story.

I touched on this briefly earlier, mentioning "being in love and every single doubt that comes with it"; that's exactly what the spikes represent in this game when it comes to the narrative.
The doubts, the questions, the insecurity, the overthinking of the main character when it comes to love, how to love or how to be loved. And as he falls deeper down into

As a contrary to that, the hearts represent their feelings. That's why some of the heart texts seem corny or cringey; they are how he feels about things. But in the context of their insecurity about love, the main character has difficulty outing those feelings. They are guarded by doubts, by insecurities, by questions. This is mostly visible in Stage 20; the hardest jump to get the heart (and you have to do it twice).

And by the time you reach "the end of the line", in Stage 21 (which deliberately mimics the intro), the heart isn't even visible anymore. It's not just guarded by doubts, but the character has just hidden it completely away from the outside world. 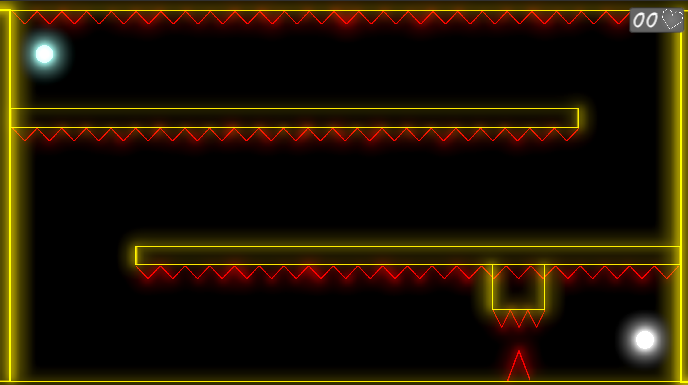 Epilogue - The Last Thing I Saw.

And with that, I think I've touched on just about everything the story and design has to offer, for now, at least.
As mentioned in my previous post, I'm developing a sequel for The Last Thing She Saw (The Last Thing I Saw, although that name is subject to change) that'll continue where this story left off (kind of), so expect that in a couple of weeks (or months...)!

Anyway, if you made it through the entire essay, thank you so very much. I appreciate it more than you could ever imagine.
It's been a blast writing and designing every little nook and cranny of this game, and I hope you had as much fun playing the game.
I'm excited to be developing the next one without a tight deadline (really, 7 days isn't that much to make a game on your own), and I hope I can get you excited for it as well.

Regardless, thank you for playing my little piece of personal story, so much.
~Snowy <3

Get The Last Thing She Saw

The Last Thing She Saw

A photon makes its way to someone's eyes, while listening to her story.