"The Last Game She Made." - Postmortem 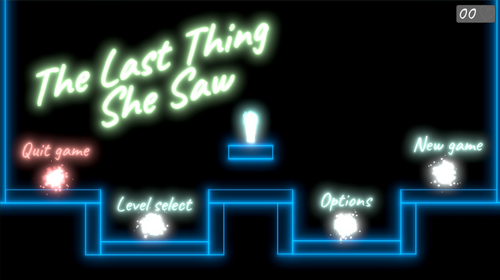 Prologue - The Last Thing She Saw

It's a week after the initial release of The Last Thing She Saw, and I found it time to maybe shed some light on some matters in the game.
I'll be writing a two-part mini-essay on the game. This postmortem will touch on everything surface-level (art, music, gameplay, ..., all that). The second part will be released in roughly a week's time, delving deeper into design decisions and how they all connect to the story.
But let's not get ahead of ourselves yet. Allow me to very briefly introduce myself first.

If you played the game already, you probably know this. I am Snowy (though that's obviously just the name I go by online).
For the purposes of this postmortem, I'm a "game dev" (if I'm allowed to use that term very loosely), though you'll never hear me say that about myself. At heart, I'm a writer (or "story artist", whatever you prefer), which is probably very obvious when playing the game. (Who else could make a narrative-driven precision platformer?)
Other than that, I wouldn't say I have any skills. I'm okay-ish at art, I'm alright at music (but only when given some help; more on that later).
That's about everything you need to know for the postmortem. If you have any other questions, please do ask them.
Now sit back and relax. It's going to be a long post.

I have no shame in admitting that I... borrowed... the idea of being "the last photon" from another game (namely "The Last Photon"). A game that used to be on steam, but was so extraordinarily bad (in story, gameplay and overall execution) it got taken down for purchase.
This game was my attempt at trying to do the concept the justice it deserved, and I would say I succeeded in that. And while there's definitely a lot of unexplored ground when it comes to mechanics, I think I did a good job for it being a game jam entry.
This is where I'm cutting the story-/concept-related segment short; I don't want to talk about it too much in this postmortem, seeing how I'll have a separate essay for that on its own. (And boy, is there a lot to be said about it!)

Chapter 3 - The Last Thing She Saw (And Heard)

I am extremely happy with how the visuals and music turned out, but let's tackle them separately here.

When thinking up the concept of the game, I knew it had to be minimalist and neon. The simple - and arguably cute - neon style just fit the story theming too well to let it pass.
There's a few more layers (mostly story-related) as to why I specifically chose this style, but a major one was that I am no artist by any stretch of the imagination. I know how to do oversimplified things, I know how to do cutesie things and I know how to make standard Unity particles look good. That's it. So a simple graphics style like this really saved me heaps of dev time.
Time I could spend better on game- and level design, and music.

Talking about the music, I mentioned "I am alright at music (but only when given some help)". This is where that becomes relevant.
I don't really write music myself, technically. I get a lot of help from existing sheet music and existing melodies to give me an idea of how things sound. It's a practice I took as a habit since my Ludum Dare 41 entry, and since then creating music has become much more of a joy.
For this game specifically, I took a lot of influence from the OST of two games: DuckTales NES and Rayman 3: Hoodlum Havoc.
My Blind Love (the main menu and credits track) focuses on the former, with a prominent inspiration being the The Moon theme.
One Final Photon (the main game loop) focuses on the latter, with the prominent inspiration being The Land of The Livid Dead.
I'm pretty sure you'll find very clear similarities between the tracks.
To produce the music, I used Bosca Ceoil (the "Glockenspiel" instrument, even though I'll advertise it as "Music Box" music). That might surprise you if you've heard of the program, because the sounds it uses are very recognizable and very MIDI-like.
Luckily I know my way around some audio editing, so I managed to get rid of that trademark Bosca Ceoil sound, and make it sound more like an organic music box/glockenspiel.

The only off thing about the visuals was the font, which was a major mistake on my part.
If you haven't seen the old font, check out the Devlog for Patch 1.1.1. It has a real nice comparison on the bottom.
The biggest reason the old font ("Beth Ellen", by the way) was a mistake, is because apparently it caused for a lot of unreadable or awkwardly readable text (and I'll admit the "I" looks like "of" and the "G" looks like "D"). Personally, I didn't have much problems with the font (sans aforementioned ones), so I didn't think it'd be as big of a problem as it was. (Just about everyone complained about it. I'm not joking.)

Chapter 4 - The Last Level She Designed

I'm so-so about the level design I pumped out. And I think a lot of players will agree with me on that. (But we might not see eye-to-eye as to why.)
The game is tough, unforgiving, evil, diabolical and malevolent. Yes, and that increases tenfold when you try 100% complete it. (Don't even get me started on "True Ending"; 110% completion.) But believe me when I say that all of it is by design (though I'll admit some stages could benefit from a difficulty decrease).
What I'm not happy about is the difficulty curve, or - more specifically - the learning curve, and the way the game messes with what you've learned just to spite you (I'll come back to that in the story essay). And the fact the difficulty curve is a problem is very visible in the fact Stage 3 is a choke-point for a lot of people (for 100% completion, at least), together with Stage 8 (more on Stage 8, again, in the story essay). Both levels before the mid-way point of the game; before the pivotal part of the gameplay and story even kicks in.

And however you twist it - whether it was my intention to make it like that or not - that's bad for a game. But I can see why I made that mistake (beside inexperience with making precision platformers and how their difficulty curves up); the level design is very much done in favor of complementing the story, not the other way 'round.
Now, I'll be the first to admit that it's a weird design decision to use the level design as a means to enhance the story in a tight platformer (as opposed to have a story as a means to give reason to the levels), but as a writer at heart, I can't not.
But because this was a jam game, I had to keep the story relatively compact (21 fully play-tested levels in less than 7 days is already impressive if you ask me), which meant a lot of the character progression and evolution was left out, and the story progressed quite a bit quicker than I liked, especially at the start. In turn, that implies the level difficulty also progresses quicker than I liked (although I do still like how there's a mid-point difficulty 'reset' due to the shift in story).

I think that about does it for the postmortem and thus the first part of the mega-essay surrounding my thoughts on this game. Beside story, I think I covered most of the aspects on here, and fairly in-depth at that.

That being said, let's discuss the future of The Last Thing She Saw for a second. Because, believe me...
I'm far from done. (cue the evil laughter)

I've got plans for a sequel to The Last Thing She Saw (not just in name; in story as well), which will continue logically where this game left off. The reason I'm doing this instead of expanding The Last Thing She Saw first to make that flow better, is because I want to keep the idea of it starting out as a jam game bound to it. I'll still be keeping an eye on TLTSS to update it, and if I'm feeling creative, I might expand the soundtrack a bit post-jam as well, but I will not be adding any additional levels or challenges to it. (Although maybe I should add a "proper" story reward to 100% and 110% completion.)

Epilogue - The Last Story She Wrote

And with that little tease, I'll be ending this post here.
As promised: later next week will follow a - possibly even longer - essay on the story (which I might still cut in two, if needed) and everything you probably missed about it.
There will be spoilers, so you have about 7 days to get to the ending. (Alternatively, you can watch me struggle to complete it almost-100% in this video. Yes, it is possible to 100% it in 2 hours or less.)

Anyway, if you got to this point: thank you so much for sticking with me the entire way here. And thank you for listening to my story.
I honestly appreciate it more than you could even imagine.
~Snowy <3

Get The Last Thing She Saw

The Last Thing She Saw

A photon makes its way to someone's eyes, while listening to her story.